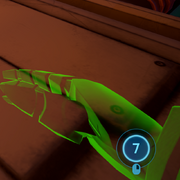 The charge counter, found on the bottom right corner

Charges can be sent to another Workonic at the cost of 20 energy, giving both a single overcharge point. This means both benefit directly from either of them sending a charge! When a Workonic has 20 energy or less, charges cannot be sent to prevent the unit itself going into Shutdown. It's important for Workonic strategy to find a balance between sacrificing energy points for charges at the right moment and being able to take a few more hits from Enforcer fire.

A Workonic can never have more than ten charges at one time but will still be able to send charges at that point if the recipient isn't full on charges. Do note that when sending a charge a visible spark will fly from the sender to the receiver. This can be perceived by enemy Enforcers, thus endangering both units' locations being revealed!

Bubbles' overcharge ability, nicknamed bubble, is a spherical shield. The shield is projected in a radius of 12 meters around Bubbles and remains stationary. Workonics can walk through the shield just fine but Enforcers can't. An Enforcer can damage the shield to destroy it, the amount of health a shield has depends on the amount of charges used. Bubbles can create an unlimited amount of bubbles as long as their charges are replenished in between. Note that this would make more use of the additional 25 base health per bubble.

After 10 seconds the bubbles start to decay at a rate of 50 health each second.

Each charge used increases the bubble's health by 50 beyond the initial 25 points.

Glitch's overcharge ability, nicknamed Pulse Barrage, destroys as many of the Enforcer's traps as the amount of charges used. A targeted trap will be marked with a triangle on-screen when in view, this allows the unit to see traps easily. Note that increasing the field of view in game does not increase the area where traps are targeted.

The Pulse Barrage manifests itself as a sphere of energy launching projectiles in an arc towards Enforcer structures and destroying them. After activating the sphere remains stationary, allowing the Glitch unit to run away in the meantime. Be warned as Enforcers will see the sphere while the barrage is being launched.

Each charge used increases the amount of traps destroyed.

Cyclops' overcharge ability is a Blinding Beam that makes the affected Enforcer unable to see Workonics even when revealed for a limited time. Additionally, the beam will knock the Enforcer back considerably and also remove some of their energy. The duration of the blinding effect and the amount of energy stolen are based on the amount of charges used.

The beam shot by Cyclops is clearly visible and will give away their position to other Enforcers. While under the effects of Blinding Beam the Enforcer's view becomes distorted and gray, also they'll hear a static noise.

Shooting the same Enforcer twice increases the duration by the new amount and will also take the energy.

Each charge used increases the duration by 0.8 seconds beyond the initial second.

Each charge used also increases the amount of energy the Enforcer loses by 5.

Turbo's overcharge ability is a Speed Boost lasting a limited duration. The duration depends on the amount of charges used. While in Speed Boost Turbo is able to launch themself over obstacles, which is handy to jump over the Enforcers' barricades.

While Turbo's boost is activated, their movement speed increases to 30 instead of the usual 17 for Workonics.

Each charge used increases the duration by 0.3 seconds beyond the initial 0.2 seconds.

Buddy's overcharge ability, Safeguard, makes an ally invulnerable for a period of time based on the amount of charges used. When it's activated Buddy will also heal their teammate.

This can be used from any distance, the ally just has to stay in line of sight. After Buddy loses line of sight for about a second their ability will deactivate.

Be warned however, while the ability is active Buddy is visibly linked to the ally by a glowing beam. This makes Buddy easy to see and take down as they're not invincible themself. Taking buddy down is the way the Enforcers can stop Safeguard early.

Each charge used increases Safeguard's duration by 0.4 seconds beyond the initial 1 second.

Each charge used also increases the amount of energy healed by 10 points.

Cannon's overcharge ability is the Quanta Cannon attached to their left arm. It shoots multiple slow-moving orbs of energy that act as a single punch on an extractor. The orbs can be destroyed by Enforcers.

For each charge used, one projectile will be fired in quick succession. It takes one second to charge up and half a second for each consecutive shot after that.